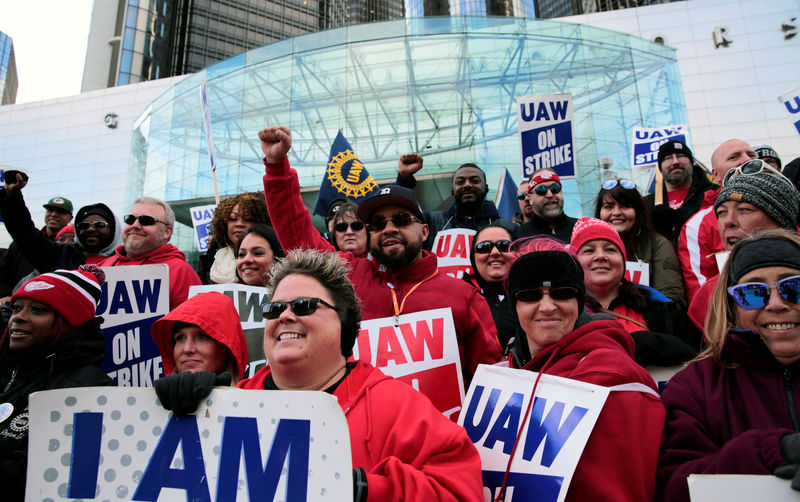 By Paul Lienert and Joseph White

DETROIT (Reuters) – The United Auto Workers union wrung higher pay and better coverage for temporary workers from General Motors Co (N:) as part of its tentative deal to end a month-long U.S. strike, but the deal would also allow the automaker to move forward with closing three plants, the union said on Thursday.

The highlights of the agreement were released by the UAW after the union’s national council, representing GM plants across the United States, reviewed the terms of the four-year deal. It will now be up to the 48,000 workers to ratify the deal.

It was not immediately clear whether the workers would end their strike at that point or stay on the picket lines while the voting occurs – a process that could last up to two weeks.

The strike began on Sept. 16, with UAW negotiators seeking higher pay for workers, greater job security, a bigger share of profit and protection of healthcare benefits. Other issues included the fate of plants GM has indicated it may close, and the use of temporary workers.

As part of the push to protect jobs, the UAW said the union and company will jointly form a committee that would meet at least quarterly to discuss the impact of future technologies like electric and self-driving vehicles and their impact on UAW members. This group would address instances where work has shifted out of the union due to new manufacturing processes.

The agreement includes 3% pay raises in the second and fourth years, and 4% lump-sum payments in the first and third years, the UAW said. GM also agreed to make temporary workers with three years of service permanent.

Fulltime UAW members will also receive an $11,000 payment after the contract is ratified, and active temporary employees will receive $4,500, the union said. It also said the $12,000 cap on profit-sharing payments to members has been eliminated.

The UAW also had pushed for full-time employees earning less than the top wage rate of $32 an hour to progress to that level faster, resulting in all permanent employees reaching the top level within four years.

The UAW said GM also agreed to leave the union’s healthcare coverage untouched, meaning there will be no additional costs to members.

The union said GM has agreed to put “new product” in the company’s Detroit-Hamtramck assembly plant as part of the deal. Details were not provided in the UAW summary but sources have said the plant will build electric trucks.

However, the idled Lordstown, Ohio, assembly plant will close, as well as parts plants in Baltimore and Warren, Michigan, the union said. GM indicated last November that those U.S. plants would likely close as the company restructured.