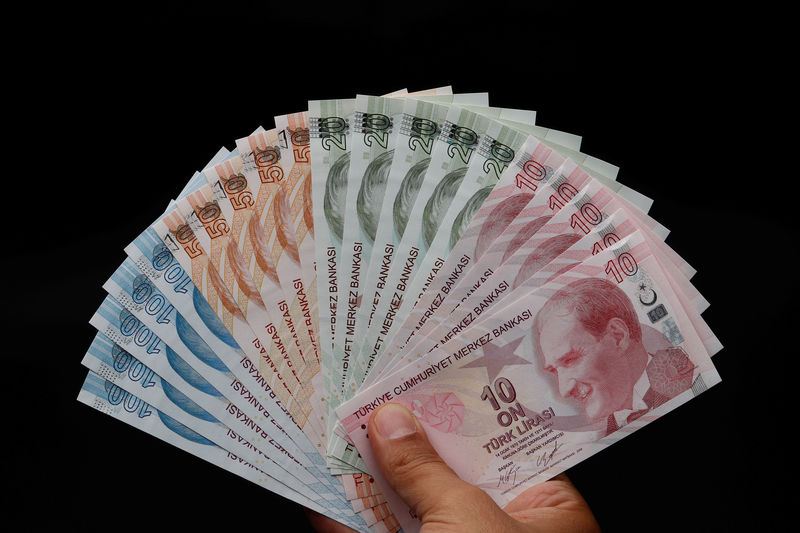 ANKARA (Reuters) – Turkey’s lira was flat on Thursday as its state banks continued to squeeze offshore swap markets to support the currency, ahead of expected high-level U.S. talks in Ankara over the Turkish military incursion into northeastern Syria.

U.S. Vice President Mike Pence and Secretary of State Mike Pompeo were due to arrive in Turkey on Thursday to urge Turkish President Tayyip Erdogan to declare a ceasefire.

The lira has thus far shrugged off U.S. opposition to its attacks against the Kurdish YPG militia, and it even gained ground after Washington sanctioned some Turkish ministers and ministries, hiked tariffs hike and suspended trade talks.

The currency lost some 30% of its value in a crisis last year that was sparked in part by U.S. diplomatic strains, sanctions and tariffs. This year it is off 11% as ties strained again over Syria and Turkey’s purchase of Russian missiles.

Turkish state banks have stepped in to support the currency, selling dollars since the Syria incursion began last week. Three bankers said the lenders also continued to squeeze an offshore FX swap market on Thursday, continuing an operation that began earlier this week. [

“The tendency of Turkish banks to provide lira to the swap market is nearly down to zero, except the pre-determined responsibilities and outstanding amounts,” said a senior banker who declined to be named.

While the bank said the indictment amounted to yet more sanctions, Ankara avoided making the explicit connection until Thursday when Turkey’s Justice Minister reportedly said it was “an issue of political blackmail.”

“We can say clearly that, based on the circumstances and the timing, it absolutely has no legal basis,” Abdulhamit Gul said according to state-owned Anadolu.

The state bank interventions echoed actions taken in March, when a swap-market squeeze briefly sent the cost of overnight lira borrowing soaring past 1,000%. It stood at 16.6% at 0730 GMT, from a close of 17.3% on Wednesday.

State banks also stepped in to sell dollars in March when the lira briefly tumbled, and traders have said they intervened again in the last two weeks, spending billions of dollars.

Turkey’s incursion into northeast Syria could imperil its economy’s recovery from recession that began after last year’s crisis, sending unemployment to near record highs.

A budget official said on Thursday Turkey could boost spending next year for military operations and refugee housing in its proposed Syria “safe zone.”