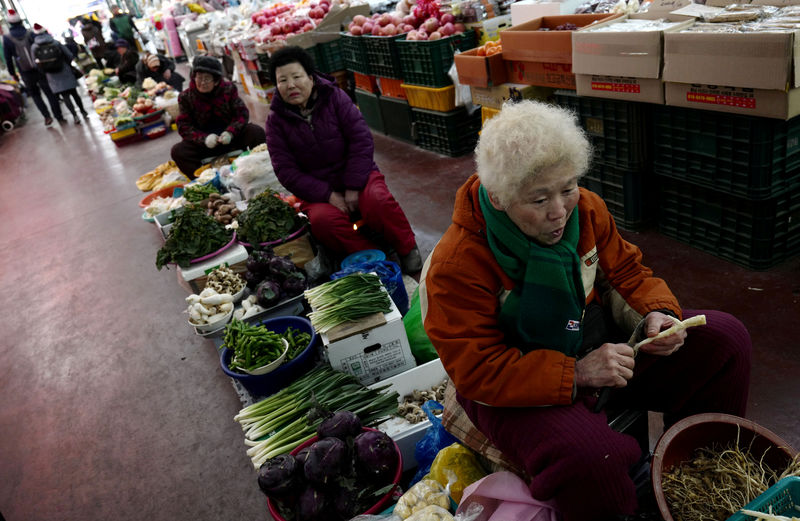 SEOUL (Reuters) – South Korea’s annual inflation fell below zero for the first time on record in September, data showed on Tuesday, due to a plunge in farm products prices coupled with weak consumer demand.

The consumer price index slid 0.4% in September from a year earlier, the Statistics Korea data showed, just missing a 0.3% fall tipped in a Reuters survey and posting the first negative annual rate since data releases began in 1965.

The fall in consumer prices, although mostly due to plunges in farm products prices from unusually high levels last year, reinforces expectations the central bank will cut interest rates as early as later this month to support the slowing economy.

Policymakers have stressed the weak inflation was mostly due to the temporary farm products price declines and played down the risk of Asia’s fourth-largest economy falling into a broader period of deflation.

“We are not in a deflation situation, where the consumer price level persistently falls for a long period,” Vice Finance Minister Kim Yong-beom told a scheduled meeting of senior officials from the economy-related ministries on Tuesday.

Prices rose 0.4% month-on-month in September, just shy of a 0.5% gain expected by economists.

The Bank of Korea, the central bank, cut the policy interest rate by 25 basis points to 1.50% in July for the first time in three years as the country’s trade-reliant economy was hit hard by cooling global demand.