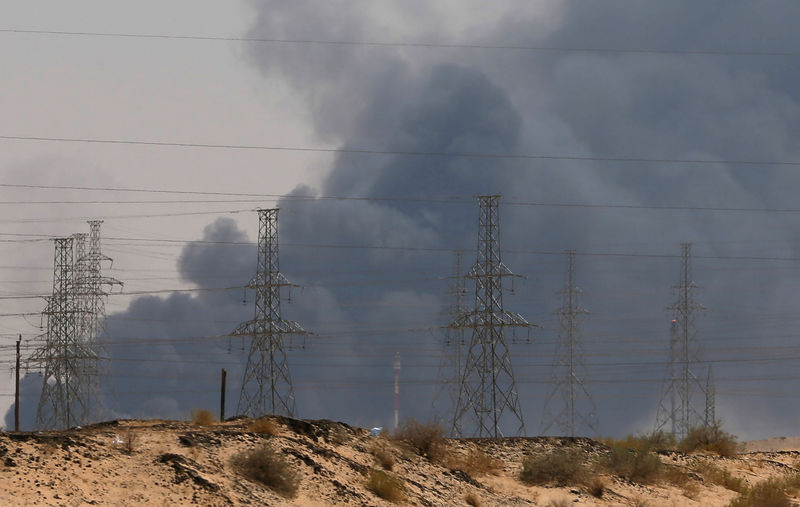 © Reuters. FILE PHOTO: Smoke is seen following a fire at an Aramco factory in Abqaiq

DUBAI/LONDON/RIYADH (Reuters) – Saudi Arabia is unlikely to list its state-owned oil giant Aramco this year after attacks this month on its facilities, two sources with direct knowledge of the company’s thinking said.

The initial public offering (IPO) of Aramco, the world’s largest oil company, is the pillar of Crown Prince Mohammed bin Salman’s economic reform agenda that aims to raise billions of dollars to help diversify the kingdom away from oil.

Aramco did not immediately respond to a request for comment. The sources declined to be identified because the information is not public.

Aramco Chairman Yassir al-Rumayyan said last week after the attacks, which initially halved the crude output of the world’s top oil exporter, that it would be ready for the IPO within one year.

The deal, which was delayed last year, had been slated to take place as early as November, sources previously said. The plan was to offer a 1% stake on the Saudi bourse, the first step of the planned 5% sale that could potentially raise $100 billion.

The deal was now expected to slip to next year after the Sept. 14 attacks on Aramco’s Khurais and Abqaiq plants, which process and clean crude, said the sources.

“They need to build confidence – in addition to restoring production,” one of them said.

Riyadh and Washington have blamed Iran for the strikes, which escalated tensions in the Middle East and raised concerns about further attacks or a new war. Tehran denies the charge.

A source told Reuters this week that Saudi Arabia had restored more than 75% of crude output lost after the attacks and would return to full volumes by early next week.

Saudi Energy Minister Prince Abdulaziz bin Salman and Aramco Chief Executive Amin Nasser have previously said output would be fully back up by the end of September.

The attacks have spooked investors by exposing how ill-prepared Saudi Arabia is to defend itself despite repeated attacks on vital assets during the more than four years it has been embroiled in a conflict in neighboring Yemen.

“I think that the attacks on the Aramco facilities have surprised portfolio managers in that they show Saudi assets as being more vulnerable to attack and disruption than many had assumed,” said Ross Teverson, head of emerging markets strategy at Jupiter Asset Management, a London-based fund.

Aramco has held meetings with bankers and analysts since the strikes, but doubts emerged among investors about the timeline of the potentially $20 billion domestic leg of the IPO.