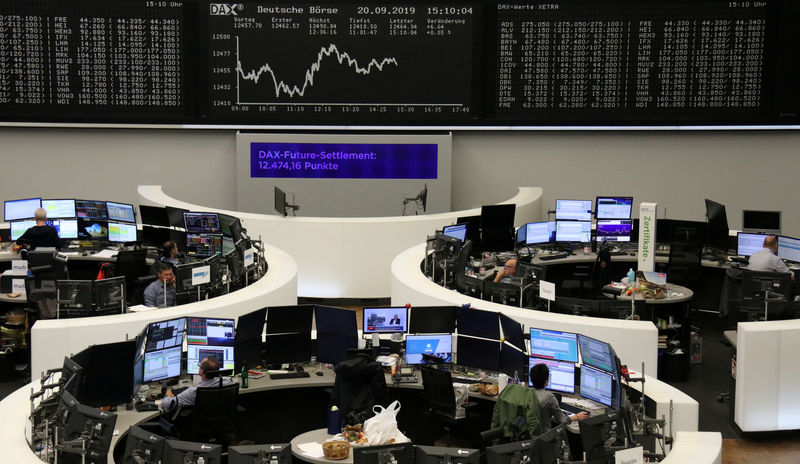 By Shreyashi Sanyal and Susan Mathew

(Reuters) – European shares were set for their fifth straight week of gains on Friday, led by defensive and retail stocks, but gains were limited as investors remained cautious about a wider economic slowdown and progress in U.S.-China trade talks.

A 1.08% increase in the retail sector () helped lift the pan-European STOXX 600 index () by 0.2%. Investors also bought into the so-called defensive sectors such as healthcare (), utilities (), real-estate () and food and beverage ().

Global equity markets were spooked at the start of the week by attacks on Saudi Arabia’s oil facilities that sent oil prices soaring and heightened geopolitical concerns in the Middle East.

But monetary loosening by central banks around the world calmed investor nerves later in the week.

“The lack of any escalation (in Saudi Arabia) so far appears to have tempered a good proportion of this week’s surge (in oil prices), prompting equity markets to recover from their lows,” said Michael Hewson, chief market analyst at CMC Markets UK.

“Nonetheless, there remains a significant amount of unease as to what might unfold over the course of the next few days and weeks.”

Optimism is growing about deputy-level trade talks between the United States and China that aim to set the tone for high-level negotiations in October.

Debt-laden French retailer Casino (PA:) gained 2% after the company said it was in talks to sell its discount store chain Leader Price to German rival Aldi.

Roche (S:) was among the biggest boosts to healthcare stocks after the U.S. Food and Drug Administration approved the Swiss drugmaker’s first whole blood test for donor screening.

London’s FTSE 100 () lagged its regional peers as British exporters were hurt by a rally in the pound after European Commission President Jean-Claude Juncker raised hopes of Britain exiting the European Union with a deal.

It was also a day of “quadruple witching” where investors unwind positions in futures and options contracts before they expire, often leading to large unexpected moves in markets.

Among other stocks, French IT services & consulting company Alten (PA:) topped the pan-region index, up almost 6%, after Societe Generale (PA:) upgraded the stock to “buy” from “hold”.

Dutch lighting company Signify NV (AS:) gave up 7% after former parent Koninklijke Philips NV (AS:) said it plans to sell its remaining 10.7% stake in Signify.