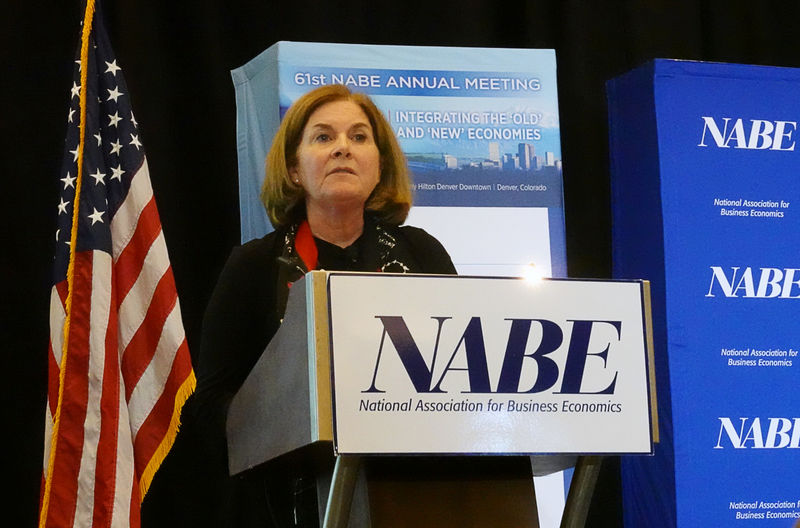 DENVER (Reuters) – Kansas City Federal Reserve Bank President Esther George on Sunday rejected the notion that the U.S. central bank should cut interest rates to try to boost low inflation, which she said is largely a result of global forces that U.S. monetary policy can do little to counter.

“In current circumstances, concern about low inflation seems unnecessary,” George told the National Association for Business Economics in Denver. “The U.S. economy is currently in a good place, with low inflation, low unemployment and an outlook for continued moderate growth.”

Fed Chair Jerome Powell has repeatedly described the economy as being “in a good place,” but unlike George has supported reductions to U.S. interest rates as an insurance policy against the effects of slowing global growth and rising trade uncertainty as the U.S. ramps up tariffs on Chinese imports.

George, by contrast, dissented on both of the Fed’s interest rate cuts this year, in July and September. The Fed currently targets short-term interest rates in a range of 1.75% to 2.00%, a setting that by most Fed policymaker estimates should help boost growth.

“If I saw the consumer losing their confidence, and that could happen, then I might rethink,” George told the group, adding that for the most part, consumer spending has been strong. “I think about this latest round of tariffs that will largely hit the consumer, and to what extent that might cause a reaction.”

But unless there is a broader economic impact, “muted inflation alone would not warrant a policy response,” she said.

In fact, she suggested, inflation could sink to well below the Fed’s 2% target and she might remain unfazed.

“I find it more realistic to accept that there will be both temporary and persistent fluctuations around this long-run target and, as long as they don’t exceed a reasonable threshold — perhaps as big as 50 or even 100 basis points — they should be tolerated, depending on broader economic conditions,” she said.

That view is at odds with concern expressed by much of the Fed leadership over years of missing the central bank’s 2% inflation goal.

The Fed, which next meets Oct. 29-30, is widely expected to lower rates at least once more this year. George said that while each meeting is a chance to rethink her stance, she made it clear that she is not committed to that plan.

“Should incoming data point to a broadly weaker economy, adjusting policy may be appropriate to achieve the Federal Reserve’s mandates for maximum sustainable employment and stable prices,” George said. But “trying to quickly return inflation to 2 percent by adjusting interest rates could require aggressive actions that would misallocate resources and create financial imbalances.”

Brexit negotiations restart in person as clock ticks down By Reuters