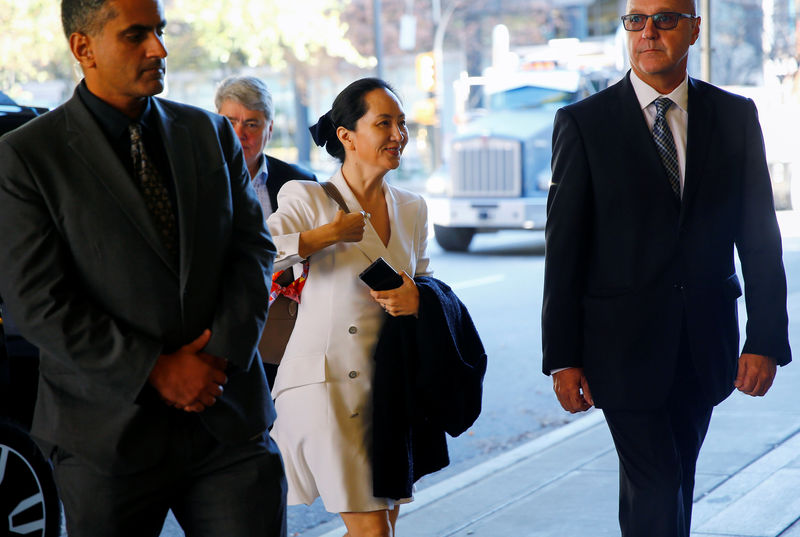 TORONTO (Reuters) – Lawyers for Huawei Chief Financial Officer Meng Wanzhou detailed a list of emails, notes and other records they are seeking to prove that her rights were violated before her December arrest at Vancouver’s airport, according to a court document released on Monday.

Meng, 47, was arrested at the airport on Dec. 1 at the request of the United States, where she is charged with bank fraud and accused of misleading the bank HSBC about Huawei Technologies Co Ltd’s business in Iran. She has said she is innocent and is fighting extradition.

In the British Columbia Supreme Court, Meng’s lawyers are seeking further documentation from Canada’s Department of Justice (DOJ), the Canadian Border Services Agency (CBSA) and the Royal Canadian Mounted Police (RCMP). They claim they meet the legal standard that there’s “an air of reality that there are other documents… that have not been disclosed,” according to the document.

If they ultimately help prove the Canadian officials abused their authority, her lawyers say, the extradition proceedings should be halted.

The documents demanded pertain to the Nov. 30 coordination in the lead up to the arrest between the DOJ, the CBSA and the RCMP, and Meng’s arrest on Dec. 1, 2018.

Lawyers for Canada’s attorney general started their oral arguments on behalf of the United States in a Vancouver courtroom Monday.

In their filing last week, they said the Crown already provided extensive documents to Meng, and that contacts between U.S. and Canadian authorities under such circumstances are encouraged.

That filing also said there was no evidence of any misconduct by border or police officers, or that Meng’s rights were violated, and there was no need for additional disclosure.

“They haven’t established an air of reality to anything,” Robert Frater, counsel for the attorney general, told the judge last week, speaking of the legal standard.

Meng’s lawyers wrapped up their arguments last week. Oral arguments by counsel for the Canadian attorney general are scheduled to run through Friday this week but could end earlier.

The extradition proceeding itself is scheduled to begin in January and experts say legal wrangling could go on for years.