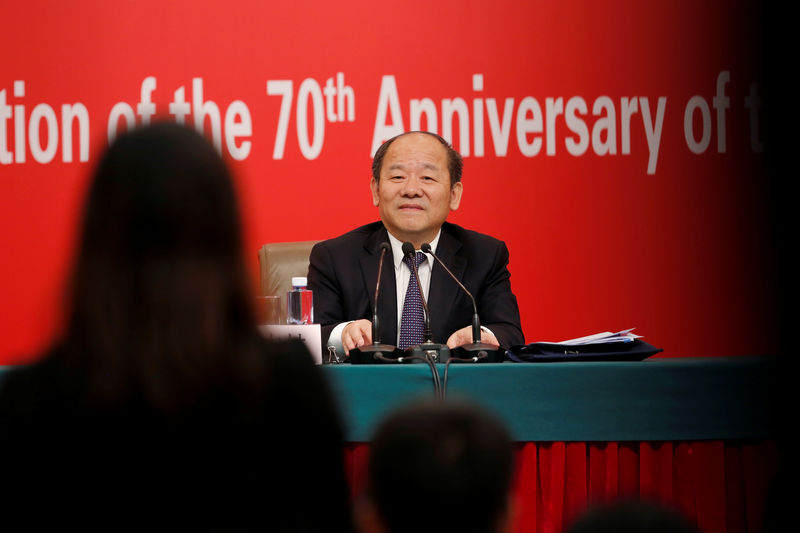 BEIJING (Reuters) – China is in no rush to follow other countries in significantly loosening monetary settings but has ample options to help prop up slowing growth, its central bank head said on Tuesday, maintaining its cautious approach to stimulating the economy.

Despite a slew of growth measures since last year, the world’s second-largest economy has yet to stabilize as the Sino-U.S. trade war shows no sign of ending. Analysts expect growth could cool further this quarter from a near 30-year low of 6.2% hit in April-June.

“But we are in no hurry to take measures similar to central banks of other countries…such as interest rate cuts or quantitative easing polices,” Yi said in a briefing ahead of the country’s 70th anniversary.

China cut its new one-year benchmark lending rate for the second month in a row on Friday, as the central bank seeks to lower borrowing costs to support smaller firms affected by the trade war and wider slowdown.

But the move was far smaller than the U.S. Federal Reserve’s and the European Central Bank’s easings of recent weeks.

Yi said there was still plenty of room to maneuver on monetary policy, though such options but should be “cherished”. He also said that authorities would maintain “normal” monetary policy for as long as possible.

“China’s monetary policy will maintain its prudent orientation,” he said.

With an eye on debt, Beijing has leaned more heavily on fiscal stimulus to address the current downturn, announcing trillions of yuan in tax cuts and special local government bonds to finance infrastructure projects.

Ning Jizhe, vice head of the state planner, told reporters at the same briefing that China would step up efforts to stabilize growth, including speeding up project construction and relaxed restrictions on auto purchases.