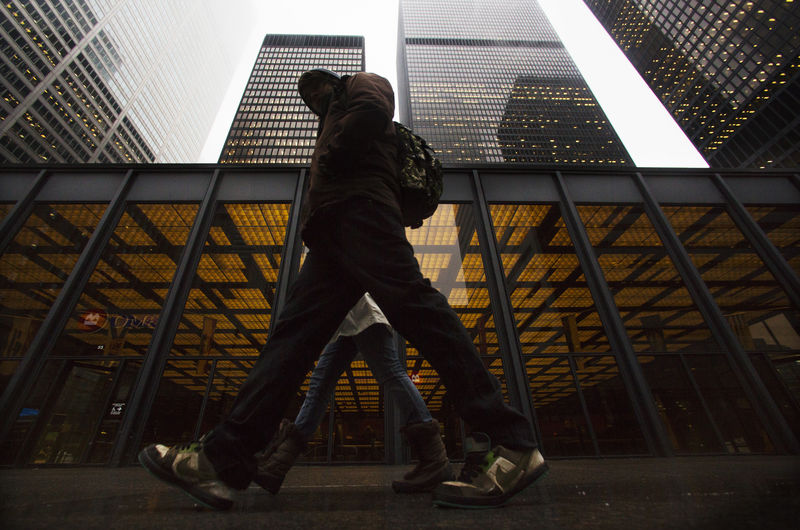 © Reuters. A man walks in front of buildings in the financial district in Toronto

OTTAWA (Reuters) – The Canadian economy added a stronger-than-expected 53,700 net jobs in September, with all the gains coming in full-time work and largely driven by the services sector, Statistics Canada data showed on Friday, reducing analysts’ expectations for a central bank rate cut this month.

The national unemployment rate fell to a near-record low of 5.5%, from 5.7% in August, while wages for permanent employees rose 4.3% year-over-year. Analysts in a Reuters poll had forecast a gain of 10,000 jobs and an unemployment rate of 5.7%. Canada hit an all-time low jobless rate in May at 5.4%.

Canada’s central bank has not moved interest rates since October 2018, even as some of its counterparts – including the U.S. Federal Reserve – have eased. The bank’s next overnight interest rate decision is set for Oct. 30.

In September, the Bank of Canada said the economy was showing a welcome degree of resilience against negative shocks, in part because of the labor market. The bank has said it will continue to monitor future domestic economic data.

“The big picture here is the job market remains quite strong,” said Doug Porter, BMO’s chief economist, on Friday. “The market had been pricing in a very low chance the bank was going to cut rates. This further knocks down those chances.”

Statscan said the services sector gained 49,400 jobs in September, mostly in the healthcare and social assistance sectors, while the goods-producing sector saw an increase of 4,300, because of the construction industry. Meanwhile, the number of full-time jobs rose by 70,000, while part-time jobs fell by 16,300.

Friday’s employment figures are also expected to be one of the last major economic releases before a national election on Oct. 21. The figures will likely be welcomed by Canadian Prime Minister Justin Trudeau, whose governing Liberals are facing a tight re-election campaign against the opposition Conservatives.

“Canadians created 54,000 new jobs in September alone,” Trudeau tweeted. “That’s what happens when you invest in the middle class and people working hard to join it. Let’s keep working together to create even more, and keep growing our economy.”

Ontario, Canada’s largest province and a key political battleground in an election that has largely focused on economic issues, gained a net 41,100 jobs in September, far outpacing its other provincial and territorial counterparts.