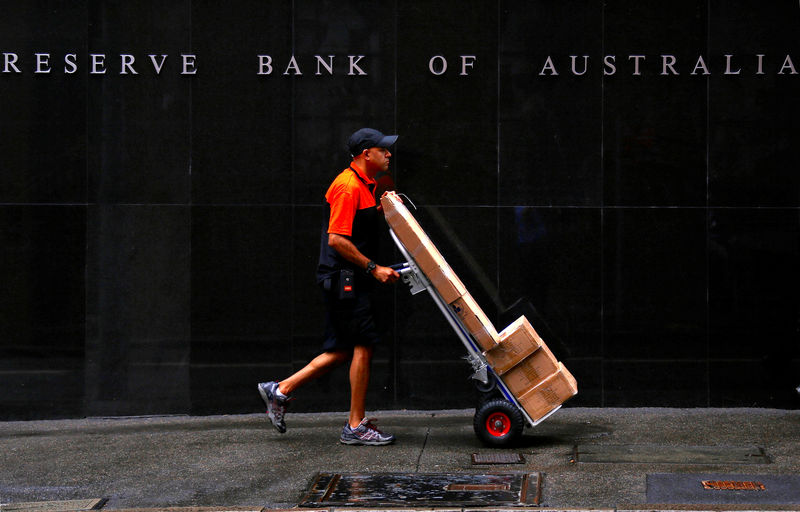 SYDNEY (Reuters) – Australian banks’ net interest margins will be hurt by Tuesday’s cut in interest rates to an unprecedented low of 0.75% and any further central bank action to stimulate the economy, analysts said.

The Reserve Bank of Australia (RBA) earlier lowered its benchmark cash rate by another quarter-point from 1% in an attempt to kick-start the economy amid sluggish mortgage demand, putting further pressure on banks’ profits.

Net interest income by the four largest banks, which dominate about 80% of the deposit and house lending market, could fall by about A$8.4 billion ($5.66 billion) if the central bank moved rates to zero percent, Wilson estimated.

The final impact would depend on a number of other factors including how much of the benchmark rate cut is passed on to customers and banks’ interest rate hedging techniques, with the official cash rate widely expected at 0.5% by early next year.

“The RBA now has only three, or possibly even fewer, more conventional cuts available to them before they will have to venture into unconventional monetary easing territory — negative rates, QE (quantitative easing), or bond yield targeting,” said Rob Carnell, chief Asia-Pacific economist for ING.

UBS analyst Jonathan Mott said that despite the expected pick-up in lending from lower rates, the banks’ “fundamentals are increasingly challenged with ultra-low interest rates”.

“The benefit to bank revenues would likely be offset by NIM pressure given the rate cuts required to re-stimulate the housing market,” he wrote in a note to clients on Tuesday.

Following the RBA rate cut announcement on Tuesday, Treasurer Josh Frydenberg called on the banks to pass on the full cut to mortgagors.

“It is the government’s expectation that the banks will pass on this 25 basis point rate cut in full,” he told reporters in Sydney.

Although they remain some of the most profitable banks worldwide, the Big Four reported a combined profit of A$14.5 billion for the first half of their financial years, down 4 percent from a year prior, as they were hit with sluggish credit growth and billions in remediation costs from wrongdoing.

The fall was also partly driven by a 11 basis point reduction in net interest margins, the difference between the rates paid and charged for money lent by banks, to 1.95%.

As the cash rate falls toward zero, it gets harder to reduce deposit rates to offset the cheaper mortgages they must now offer borrowers, while also losing on lower investment rates.

If rates moved to zero percent, NIM margins could shrink by as much as 26 basis points, Evans & Partners’ Wilson said. The calculation excluded all other factors, he added.