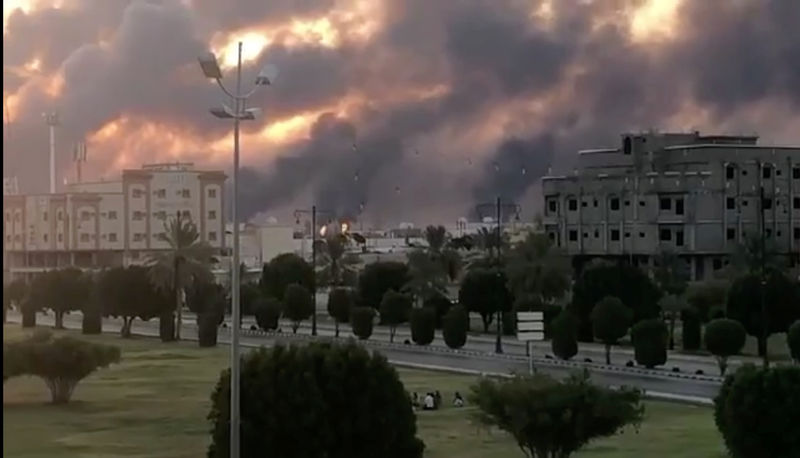 HOUSTON (Reuters) – Saturday’s attacks on key Saudi Arabia processing plants will test the world’s ability to handle a supply crisis as it faces the temporary loss of more than 5% of global supply from the world’s biggest crude exporter.

The Iranian-backed Houthis group in Yemen claimed responsibility for attacks that shut two plants at the Abqaiq facility, the heart of the Saudi oil industry, which will cut the kingdom’s production by about 5.7 million barrels per day (bpd), more than half of the kingdom’s output, according to a statement from state-run Saudi Aramco.

Crude prices could spike by several dollars per barrel when markets open Sunday night as a prolonged outage could prompt the United States and other countries to release crude from their strategic petroleum reserves to boost commercial stocks globally. The U.S. Energy Department said on Saturday it is ready to release oil from its strategic reserve if needed.

“Oil prices will jump on this attack, and if the disruption to Saudi production is prolonged, an SPR release … seems likely and sensible,” said Jason Bordoff, founding director of the Center on Global Energy Policy at Columbia University in New York.

It is too early to know the extent of the damage to the processing plants and the Saudi supply chain that brings crude from oil fields to export facilities. The chief executive of Saudi Aramco, Amin Nasser, said in a statement that the company will have more information within 48 hours, as it works to bring back the lost output.

Aramco exported more than 7 million barrels per day (bpd) of crude last year, with almost three-quarters of its crude exports delivered to customers in Asia last year. The country has about 188 million barrels in reserve, or roughly 37 days of Abqaiq’s processing capacity, according to a Saturday note from Rapidan Energy Group.

The spare capacity held by the Organization of the Petroleum Exporting Countries https://tmsnrt.rs/2kxzPFn (OPEC) to supply consumers in the event of a significant production shortfall has been declining for decades as aging oil fields have lost production capacity.

Saudi Arabia’s 2.3 million bpd of effective spare capacity in August accounted for more than two-thirds of OPEC’s on-hand supply of 3.2 million bpd, according to the International Energy Agency, with most of the rest from Kuwait and the United Arab Emirates.

Russia may have spare capacity following the international pact between OPEC and its allies to curb production in support of crude prices, analysts said.

The U.S. Strategic Petroleum Reserve currently holds about 644 million barrels, according to the U.S. Energy Department, roughly equal to 52 days of U.S. production.

A prolonged outage could spur higher production and exports from the United States, but it takes months for U.S. companies to respond to price signals because of logistical limitations, analysts and traders said.

The United States now produces more than 12 million bpd and exports more than 3 million bpd, but it is unclear if U.S. export facilities can handle additional shipments.

“Every day the facility is shut down, the world loses another 5 million barrels of oil production,” said Andy Lipow, president of Lipow Oil Associates. “The world’s spare capacity is not 5 million barrels per day.”

Gold Up, Regains Shine Despite Vaccine Approval Retreat By Investing.com