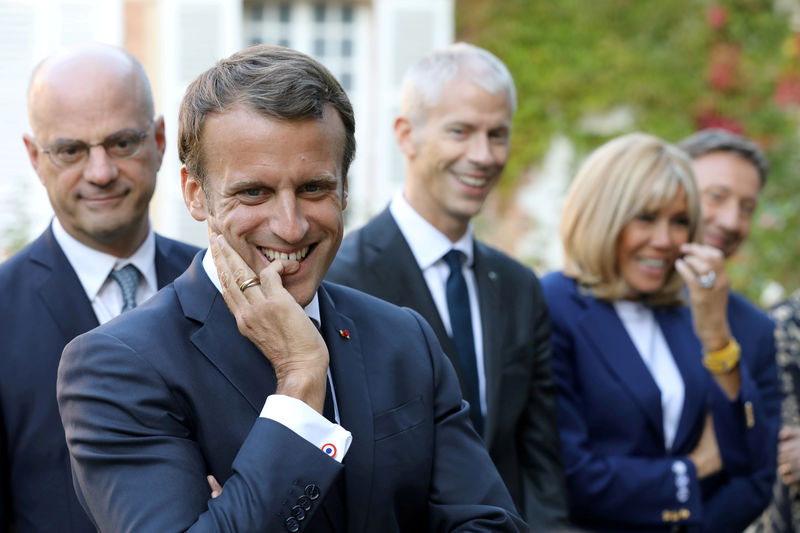 © Reuters. FILE PHOTO: French President Emmanuel Macron visits the Chateau de By (“By Castle”) in Thomery in support of the European Heritage Days

LONDON (Reuters) – Prodded by worries about the worst global economic outlook in a decade and electorates still smarting from years of austerity, euro zone governments are starting to loosen their budgetary purse strings.

Don’t expect “new deal” investment programs to transform the region’s economy, however, or even the fiscal shot in the arm that European Central Bank chief Mario Draghi says is needed — at least, not until things get much worse.

“There is a shift towards talking about stimulus but there is no dramatic leap forward,” said Philippe Legrain, adviser to the European Commission during the aftermath of Europe’s 2009 sovereign debt crisis and author of the book “European Spring”, a diagnosis of Europe’s economic failings.

“There is no sense of urgency so far … That might happen when the euro zone enters recession.”

Economists now see a one-in-four chance of a euro zone recession in the coming year. The possibility of a no-deal Brexit in the coming weeks or months should also be concentrating minds across the 19 countries that use the euro.

Europe’s response to the crisis of a decade ago — protracted austerity combined with massive central bank stimulus and still-unfinished banking reforms — saved the euro but has left many of its economies numbed. Euro zone growth was just 0.2 percent in the second quarter of 2019.

While the ECB’s 2.6 trillion euro stimulus program may have helped kick-start a post-crisis recovery of sorts, deep cuts to public spending are blamed for exacerbating poverty and shredding Europe’s welfare safety nets.

Stung by the rise of anti-establishment parties across the continent, and with regional powerhouse Germany on the brink of recession, governments are starting to act.

In Angela Merkel’s last months as German chancellor, politicians in Berlin are for the first time in years publicly questioning a self-imposed balanced budget rule and exploring ways to spend off-budget.

In its first budget since the “yellow vest” street protests began last year, France will this week offer 9 billion euros of tax cuts and put on hold some earlier debt-cutting promises.

“The priority now is to address the totally justified anger of those who are not making ends meet,” Budget Minister Gerald Darmanin told Le Parisien daily.

Even more eye-catching was last week’s announcement by the Netherlands, one of the euro zone’s fiercest advocates of fiscal probity, of new spending on health and housing. An ambitious national investment fund will be launched there next year.

And Italy’s new government has signaled it will deliver an expansionary 2020 budget while it drums up support for its campaign to re-focus the EU’s budget rules to promote growth.

But hard evidence of a game-changing shift remains absent, even as record-low debt costs have opened the door to an estimated 140 billion euros of spending by the end of 2021.

Merkel on Friday had the chance to use domestic concern about climate change as cover to issue new debt to re-set the economy on a green path and inject some short-term stimulus.

But the plan announced, offering a headline figure of 50 billion euros of new measures but in a budget-neutral package spread over four years, fell short of some expectations.

“We think any boost to demand would be too small to make much difference to short-term growth prospects in the euro-zone as a whole,” Andrew Kenningham of Capital Economics wrote in a note entitled “Wishful thinking about German fiscal policy”.

He noted that the package fell well short of the stimulus announced by Merkel’s coalition in 2009/10, worth 1.5% of GDP.

And while there was much excitement at media reports that the Dutch government would funnel 50 billion euros — 6% of GDP — into its proposed investment fund, the final announcement omitted any specific figure.

“The Dutch did not give Draghi a mind-blowing farewell present,” noted Marcel Klok, senior economist at ING bank.

Euro zone finance ministers agreed this month that fiscal policy must “play a part” in countering the downturn but made clear they planned no coordinated stimulus like the 200 billion euro package agreed in 2008 after Lehman Brothers collapsed.

Christian Odendahl of the Centre for European Reform said it was clear from resistance within the bloc to a common budget to help out euro zone nations in difficulty that there is limited appetite to shake up the current EU framework.

Moreover Italy’s push for “green” investments to be exempted from national deficits has got short shrift in Brussels, a source close to the matter said, adding that any flexibility would be no more than 0.25 GDP points of the structural deficit.

“I’m not sure the review of fiscal rules will get far,” said Odendahl. “The political dynamic in Europe has not shifted.”

Some think that may change if the French get their way.

As the close of the Merkel era allows Macron to emerge as the region’s de facto leader, France is already pushing the idea of a “growth compact” while expressing vocally its concerns about the German slowdown.

Many expect his compatriot Lagarde to amplify Draghi’s call for fiscal support when she arrives at the ECB next month.

“She will have to do a lot beyond simple monetary policy to persuade governments to play their role,” said Legrain.