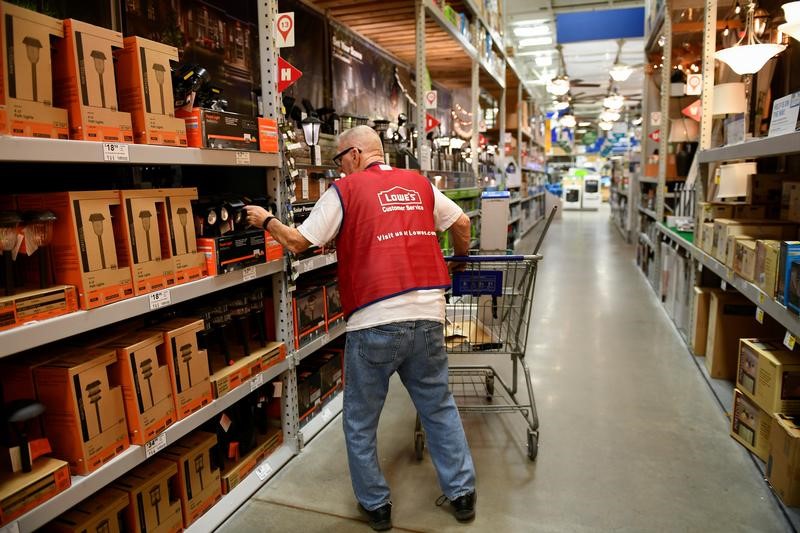 Investing.com – Here’s a look at three things that were under the radar this past week.

1. Home Improvement Sector in a Fix

There’s about a month to go until home improvement titans Home Depot (NYSE:) and Lowe’s (NYSE:) deliver results, but data this week may have given investors a reason to shun the stocks before their numbers hit the tape.

The toolmaker said its full-year revenue would of analysts’ estimates, blaming weaknesses in the auto and residential construction sectors.

The ominous outlook from Stanley hit shares of Lowe’s and Home Depot, as the toolmaker’s report is used as a proxy for the underlying health of the housing sector.

Whatever optimism may have remained in the wake Stanley’s dour report was hammered hours later. The National Association of Realtors said fell to their lowest level in more than three years.

Loop Capital analyst Laura Champine downgraded Lowe’s to hold earlier this week and lowered her price target for the shares to $99 from $125 on expectations for industry demand to moderate this year.

Champine said Lowe’s will need to ramp up promotional activity to achieve expectations for 3% sales growth, but this could also compress margins at a time when input costs continue to rise owing to labor shortages and the U.S.-China trade dispute.

The gender pay gap remained around 20% in the latest quarter, showing no appreciable change since 2010, leaving public companies with plenty of work to do in addressing the issue.

Women earned 80.3% of what men earned in the fourth quarter of 2018, the Bureau of Labor Statistics reported. Women earned a seasonally-adjusted median weekly salary of $796, compared with $991 for men.

The gap is slightly wider than the third quarter, where women earned 80.9% of what men did.

Going back to the start of the decade, the gap is just slightly down from the first quarter of 2010, when women earned 79.2% that of what men earned.

Pressure will continue on companies to give opportunities to women in higher-paying positions, as well as ensuring equal pay for equal work. The banking sector in particular is in the spotlight for its disparity in wages.

Last week Citigroup (NYSE:) revealed its gender pay gap is at 29% for women, well above the U.S. average.

“We know we need a comprehensive approach to our diversity initiatives to make the progress we want to see,” Citi Global Head of Human Resources Sarah Wechter wrote in a blog post.

“We should obviously be at 100% parity, and that’s what we’re striving for,” Wechter said, according to Bloomberg.

Earlier this month HSBC announced its pay gap widened to a whopping 61% from 59% the year ago, as it remained the major bank with the biggest gender pay disparity.

3. Getting Granular on Video Games

But for those watching carefully, data showed there’s still plenty left to play for. The hours of button smashing keep piling up and video game spending has never looked this good.

Video game revenue reached a new high in the U.S. last year, jumping 18% to $43.4 billion from a year ago, according to the Entertainment Software Association (ESA) and The NPD Group.

Revenue has been bolstered by a recent wave of smash-hit games.

“Red Dead Redemption 2” was red hot as it notched record sales in the U.S. last year. And Activision’s latest addition to the Call of Duty Franchise, “Black Ops 4,” was No. 2 on the best-seller list.

On the periphery, Logitech’s (NASDAQ:) results also cut short any notion that we’re approaching game over. While many know Logitech for its computer mice, its gaming accessories make up a quarter of the total revenue. And sales from its gaming divisions soared 23% in its fiscal third quarter.

Deutsche liked Take-Two the best, initiating coverage with a buy rating and $130 price target on the stock. Take-Two should outpace its rivals, supported by possible blockbuster releases over the next three years, including Bioshock and Grand Theft Auto 6, Briefing.com reported.

Deutsche Bank rated Activision a hold with a price target of $54, highlighting many transitions the company is going through.

As it stands, video gaming stocks remain in vogue, so is this week’s slip a sign of more red to come or does redemption beckon?